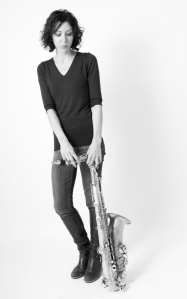 Playing a mix of original compositions and standard repertoire, this band is exploring the open quality that the trio format provides whilst taking inspiration from some of the non chord sax led trio’s of the moment. “Freestone was fluent with subtle phrases, and delicate asides, and it was a combination of her drive and that rare ability of seeming to speak through the instrument and control every syllable, that engaged the attention. She didn’t fall in to the trap of serving up the quotidien, rather she worked in and around the repertoire to fashion her own vocabulary and come up with captivatingly understated and original statements……adroitly complemented by her inspired rhythm section, well versed in the art of the finely tuned response, the trio’s playing was economical, concentrated, but in a lightly pressed way” Londonjazznews.com Review.

Tori Freestone attended the Leeds College of Music Undergrad and Guildhall Postrgrad jazzcourses and was regional finalist of Young Jazz Musician of the Year in 1996. She co-leads the band ‘Compassionate Dictatorship’, releasing a debut album in 2007, a second album ‘Cash Cows’ in 2010, both on the FMR record label and a third on ‘Jellymould Jazz’ in 2013. The band have toured the UK and Europe extensively in the past few years. She has played saxes/flutes/violin with many groups in varying styles including NYJO, the Creative Jazz Orchestra, country legend Lee Hazlewood, Cuban group ‘Orquesta Timbala’, and the Dave Mannington Septet. More recently as well as leading her own trio she has been working with the Ivo Neame Quintet and the Ivo Neame Large Ensemble, Andy Sheppard, Loop Collective Member Rory Simmons’ ‘Fringe Magnetic’ (with three albums available on the loop label one of which features Jamie Cullum on vocals) ‘Solstice’ (a sextet featuring Brigitte Beraha and John Turville), and the London Jazz Orchestra. “excellent saxophonist Tori Freestone makes for a very impressive listen….. robust tenor work” -Jazzwise!

Dave Manington studied composition at Nottingham Uni and then attended the Guildhall School of Music Postgraduate Jazz course. Since leaving he has been in demand for a wide range of different ensembles in a variety of styles. Dave composed for and led his own jazz septet for several years, and now leads a quartet which is part of London’s ‘LOOP’ collective, whilst alsocontributing music to many other projects. Dave’s music has recently been heard on Radio 3 and on television. He has also accumulated extensive studio experience recording albums and sessions as a sideman playing with luminaries like Mark Lockheart, Pete Wareham, Gwilym Simcock, Pete King, Martin Speake, Alan Barnes, Tim Whitehead, Salena Jones, Roberto Pla, Martin Shaw and John Etheridge amongst others. He’s played all around Europe and appeared in the Katmandu jazz festival, Cyprus Paradise jazz, Swanage, London and Brecon jazz festivals. He was also nominated for a Worshipful Companyof musicians jazz medal awards in 2006.!

Tim Giles has fulfilled the promise shown as a child prodigy and is now widely regarded as one of the most thrilling young contemporary jazz drummers on the European Jazz scene. Aged twelve Tim performed at the Brecon Jazz Fesival and two years later was performing with the ‘Hungry Ants’ alongside Richard Fairhurst and Iain Ballamy, performing at Ronnie! Scotts, the Copenhagen and Glasgow Jazz Festivals and in Senegal supporting Joe Zawinul. He was also a member of Django Bates’ ‘Delightful Precipice’ and has recorded/played with Stan Sulzmann, Iain Ballamy, Julian Arguelles, the Perfect Houseplants and Tom Arthurs’ Centripede.He co-leads ‘Fraud’, with saxophonist James Allsopp (Cheltenham 2006’s Jerwood Foundation Rising Stars and nominated for the 2008’s Parliamentary Jazz Awards) and currently plays with many projects including Iain Ballamy’s Green in Blue, ‘Golden Age of Steam’, Stan Sulzmann’s ‘Neon’, Nostalgia 77 and ‘Dog Soup’. He was also nominated for the prestigious Paul Hamlyn foundation award for composition in 2007.